Thank you to all of our international and interstate guests for your attendance and participation at the 2017 Australasian Convention held this year in Perth, Western Australia. Old acquaintances were renewed and new friendships were forged, and we can honestly say that us Ricardians know how to have a good time!

The Convention weekend kicked off with registrations on the Friday night, where we had a meet and greet at the hotel bar of the International on the Water Hotel in Redcliffe, Western Australia. There was a wedding at the same venue so a few slightly already-happy guests hilariously tried to gatecrash our little gathering. 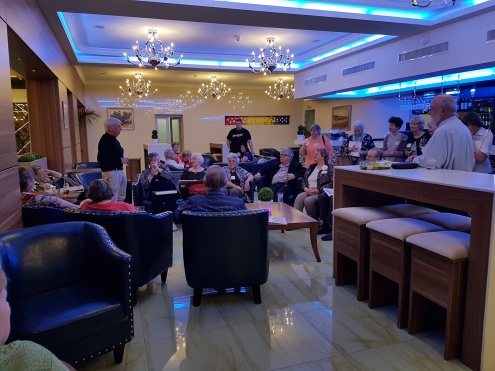 Terry Johnson, 2017 President of the WA Branch gave his opening speech and welcomed everyone who came from the Eastern states and New Zealand for the Convention. The hotel bar gave us the room and the ambience for a cosy gathering as we met up again like old friends. There was some excitement at 3am the next morning, when a hotel (wedding) guest tried to do something with their socks with a hairdryer which set off the smoke alarm for the entire complex. Seeing there was no immediate fire-danger, we went back to sleep.

Mark Porter gave the first presentation at the Convention with his run-down of his DVD of “Searching for Richard III—One Man’s Journey”, with interviews and bonus features not found anywhere online. Since his discovery in 2012, the topic of his bones, his life and his death has been covered extensively by the media. In his DVD, Mark presented a different point of view by covering the following:

The DVD presented some thought provoking questions including how our views of King Richard III may be changed with some of this unique information, and what implications this may have had for his kingship had he lived longer? A copy of the DVD can still be purchased on Mark’s website.

Next in order of appearance and special thank you to our presenters for bringing us the following Convention topics: 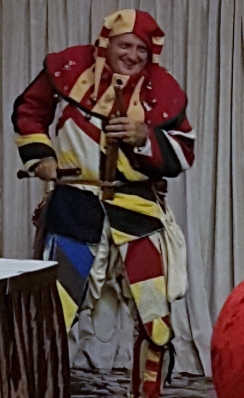 While it seemed like we filled out days talking shop, we certainly filled our nights with merriment. Saturday night brought us our Banquet held at one of
the function rooms of the hotel. The staff later told us that they had never had such fun in their lives with the costumes and were disappointed that we did not
continue the weekend in our regalia.

Professional jester Jonathan de Hadleigh once again delighted us with his antics throughout the night of the Banquet. His appearance was a real treat for us and drew many laughs during the night.